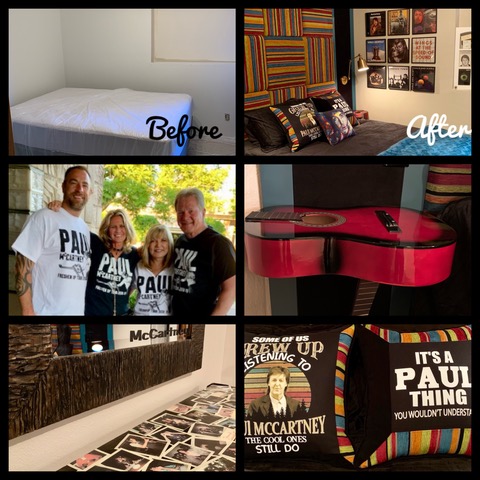 ALL YOU NEED IS LOVE…And A Paul McCartney Room

All You Need Is Love…And A Paul McCartney Room

I have been a Paul McCartney fan since my very first concert, Wings Over America, May 5, 1976 at Chicago Stadium.  My biological father was a Beatles fan and Paul was his favorite. He camped out overnight in a long line of people to get us 2 tickets.  Our seats weren’t the best, I believe we were behind the stage actually, but I didn’t mind. I was 13 and it was my first concert ever and we were downtown Chicago!  How cool was that! I had no idea who the Beatles were, who Paul McCartney was or what songs the Wings played. My bedroom at the time had Donny Osmond and David Cassidy posters.  That’s all I knew. This concert changed me. I’m really not sure how, but I would never be the same. At age 13 I became a die hard Paul fan. And he would become my 1st love. I immediately signed up for the Paul McCartney & Wings Fun (yes fun) Club.  To this day I tell everyone I was the President of that club but I have yet to find any record of that. I wore my Wings Over America concert t-shirt every chance I got. And Donny & David were quickly replaced by Paul & Linda McCartney, Denny Laine, Jimmy McCulloch and Joe English (Wings Over America band members at the time).  I started collecting albums, magazines, posters. Again I was only 13 so Paul would probably fade out of my life in my later teens and I would move on to the Journey, REO Speedwagon, Climax Blues Band posters, and 8 tracks I’m sure. Nope…that didn’t happen. 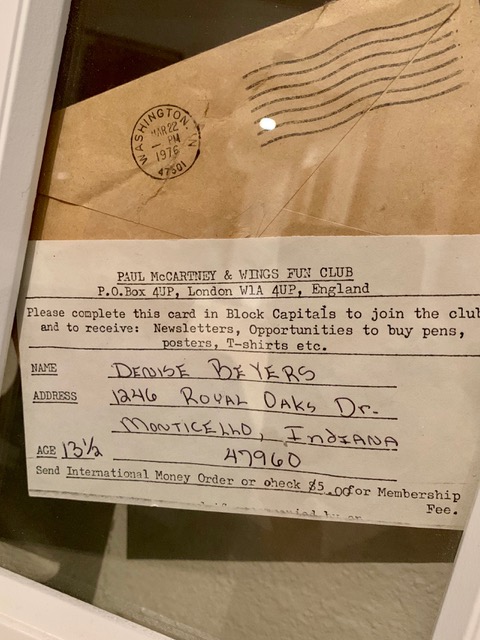 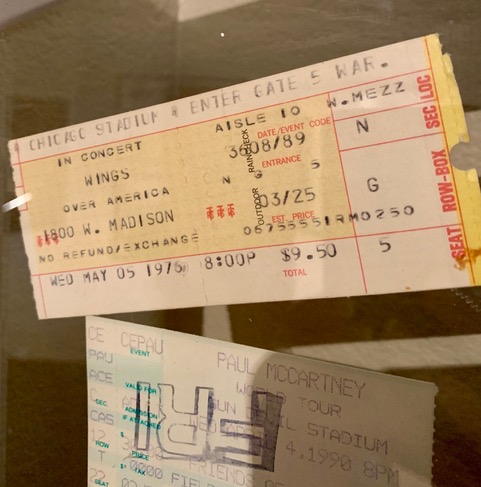 Check out the price of this ticket!!!

Into my teens I listened to the top 40’s and went to the Journey, Styx and REO concert’s but my heart belonged to Paul.  I’ve been decorating since I can remember (turned my grade school desk interiors into troll houses but that’s another story) so I designed my teenage bedroom into the coolest Paul McCartney shrine you can imagine.  Posters, t-shirts, albums and 8 tracks (eventually cassettes) adorned my walls and shelves. I don’t think my high school friends really ever got my obsession but we still have a good laugh over it today. When I left home and headed to college I brought a couple of Paul items but the dorm rooms were small and I needed to put my focus into studying.  I eventually boxed up my growing collection and set it aside. As I moved around Indiana and Arizona the “Paul” box was always in tow. I got married (not to Paul as I had hoped), bought a house, had my 2.5 children (that’s an inside joke) and Paul went deep into storage. I remained a fan, continued to listen to his music, went to a few more concerts over the years, I believe 6, but the collecting of Paul items went on hold.  There were bills to pay and kids to send to college. When I went through my divorce I remember my mother letting me know that Paul too was single. I had a chance! As If..Ha-ha. I then met my best friend and now husband Rob who thankfully is not a jealous man as he has moved my Paul box around with us now at least 7 times. We have now settled into our wonderful home in beautiful Evergreen, CO. We have 2 guest rooms so of course we brought Paul into our home.  When I unpacked that box my entire teenage life flashed before me. I felt like it was Christmas! I also realized just how dorky I was back then (maybe still am 😉

I design children and adult theme rooms for myself and my clients often.  If you haven’t done a theme room you really should put that on your bucket list.  Super fun! Here is how we created The Sir Paul room in the Krogman house.

We started with the headboard.  I wanted a full wall headboard that had a bit of a 70’s vibe to it. Rob and I designed this together bringing in black velvet and the Norbar Raposa Jewel velvet stripe.  We created padded panels and designed the pattern layout on the computer. A little psychedelic but not late Beatles era like.

Next I framed my album and poster collection.  They are a little beat up as they have been proudly displayed over the years. 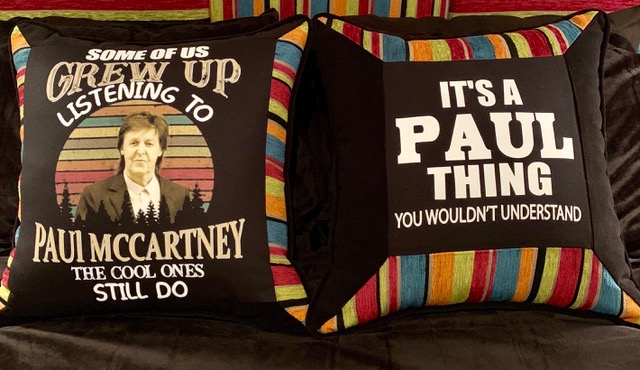 I searched high and low for Paul pillows and did find a throw pillow that fits but I needed more.  So I ordered a couple of t-shirts and paired them with the headboard fabrics. Then I gave it over to Jessica at Jessica Rose Couture in Denver and had her pull them together.  She did a fantastic job turning t-shirts into decorative Euro pillows for me. 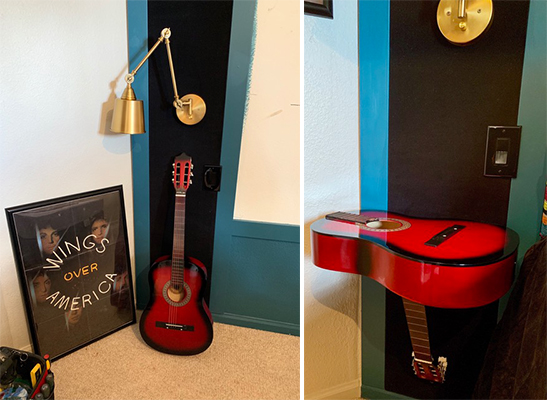 One of my favorite designs in this room are the guitar nightstands.  Now they aren’t authentic nor are they signed by Paul (Paul if you are reading this…hint, hint).  They do fit the space perfectly however. We ordered a couple of kid size guitars, cut them down and voila’…nightstands!  Of course I had to pair them with the retro brass arm sconce. 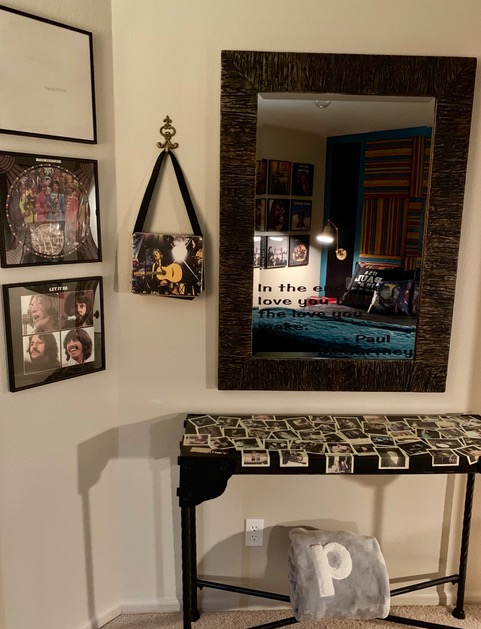 I repurposed a rustic table that was given to us by dear friends.  The poster is made up of band polaroid snapshots (can’t recall which album that was tucked into).  Cut these up to look like authentic old photo’s and secured them down with good ol’ Mod Podge. Now the table tells a story.

The only item I haven’t added to the room yet is a life size cut out of Paul that I want to place behind the door.  Just to freak our guests out a little ;-). I have a handful of friends and family that will stay in this room and smile and say, “Of course Denise has a Paul room”.

In celebration of the Paul room completion we treated ourselves to…you guessed it!  A Paul McCartney concert! (That ticket was $503) The Freshen Up Tour on June 26, 2019 at Talking Stick Arena in Phoenix.  I believe this was my 8th concert and Rob’s 1st. Best concert EVER!!! Until the next one that is. 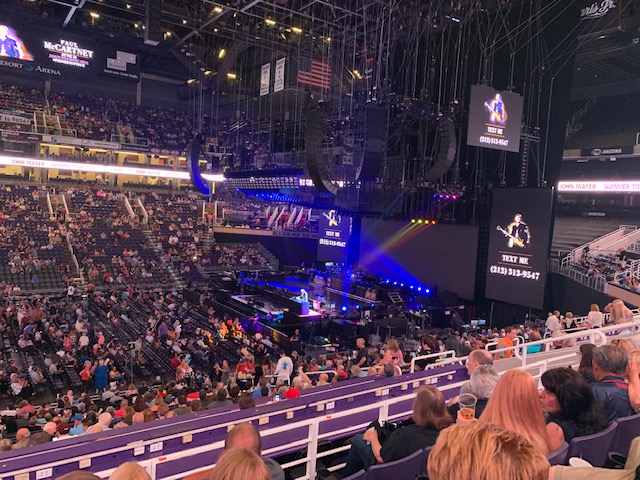 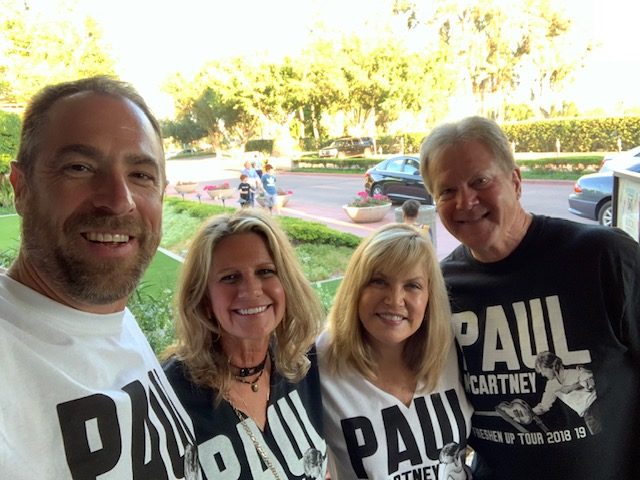 With our good friends and fellow Paul fans Diana & Marcus

I thank those of you that have put up with my Paul obsession over the past 43 years.  It will continue as I have already lined up his tunes for my Celebration of Life…no joke 🙂  I guess the only thing left for me is to one day meet Sir Paul. For now I’m happy with my room and occasional concerts.

Some of us grew up listening to Paul McCartney…The Cool Ones Still Do! 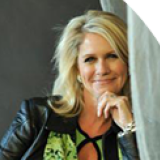 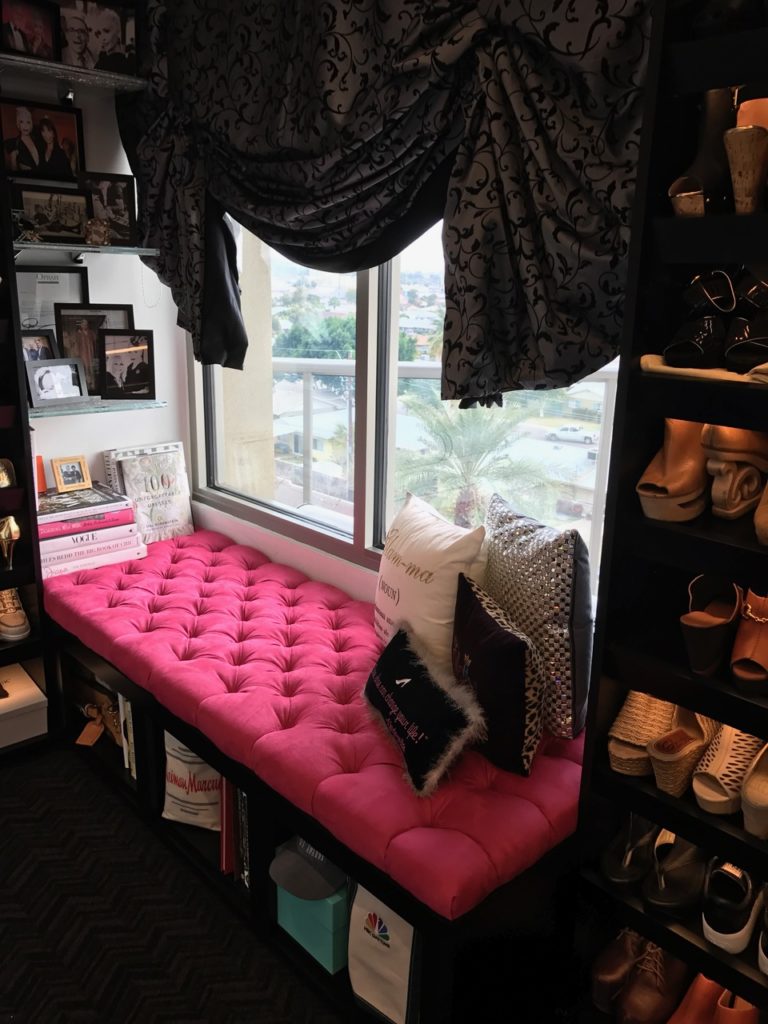 High Rise High Fashion…Welcome to Camerone’s Closet When designing a closet for a model, philanthropist, and fashionista, the organization aspect is not the only priority. As it shouldn’t be for any closet design. Many people think a closet design is more about function than fashion and often these areas of […] 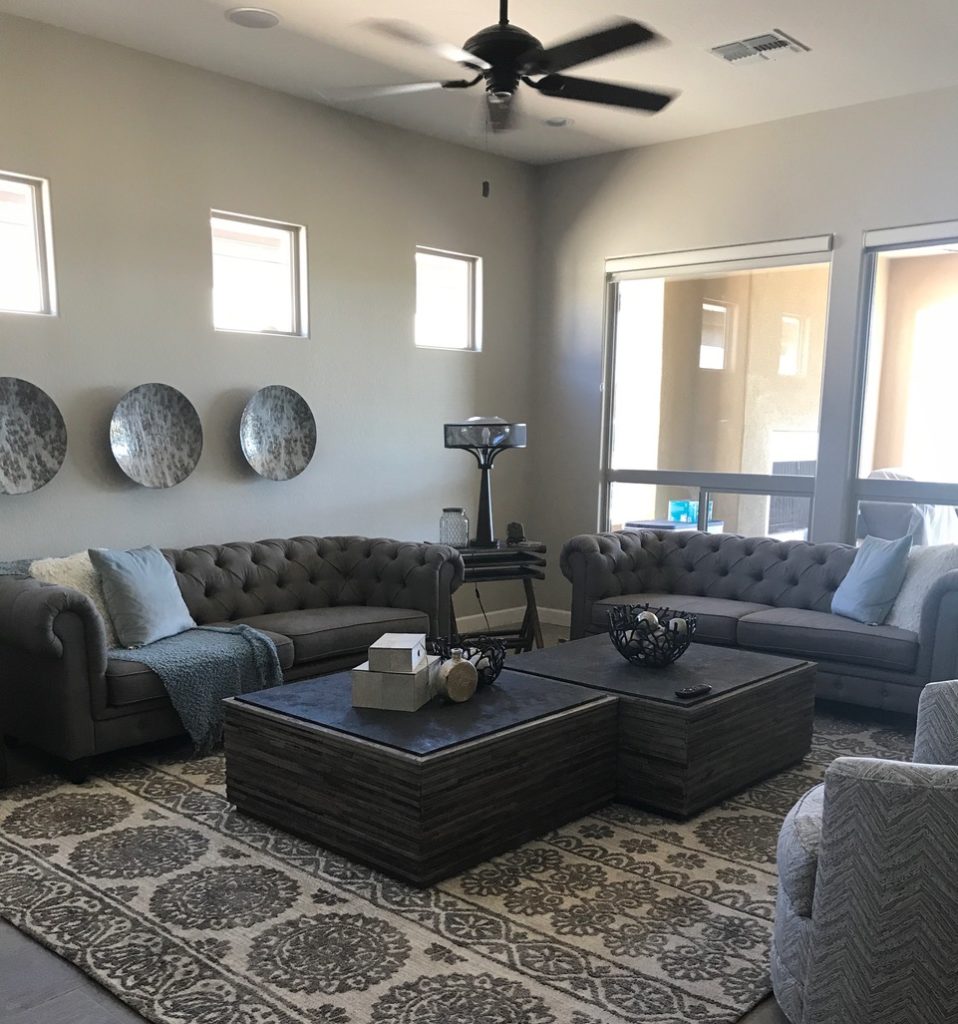 Rugs…Your Flooring’s Fashionable Cover-Up I love rugs!  I have a throw rug in every non-carpeted room in my home.  Rugs today are fashionable, affordable and bring out our style and personalities.  They add comfort and warmth, protect our flooring, tie our furnishings together, cover imperfections and even help with noise […] 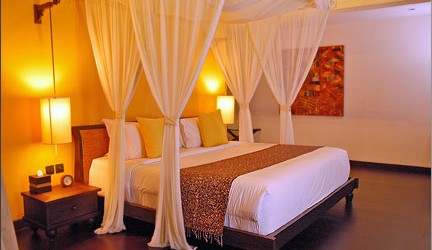 If you have romantic decorating ideas dying to come out, a great place to start is in the boudoir. Romantic bedroom decorating is not difficult. It does require a bit of effort and thought however to create a cozy elegance. Your bedroom reflects your personality as much as your cologne […]